Just wanted to say thank you to everyone on this forum and Xbox-Scene for all the tutorials, tips, tricks, and problems.

I bought two 2.6CE chips for both of my Xbox's. When I went to flash my 2nd one I thought IE kept freezing since it wasn't behaving like it did with the first chip so I closed it out (like an idiot:facepalm and after doing that a couple times I realized it was doing what it was suppose to. So after the third time, I just let it sit and after a few minutes, the bars finally came up on the screen showing the flashing progress.

I thought all was well afterwards until I couldn't access the dashboard. It would boot with the EvoX image in the top left and go to a black screen afterwards. I put the 1st chip in from the other XBOX to make sure my connections were done correctly and it worked just fine.

After spending a few hours reading and not really finding anything related to my problem, I gave up last night and ordered the Xecuter Mini Programmer with Overnight Shipping from Modchip.ca (it'll be here tomorrow). I came across an article about hot flashing this morning. It wasn't specific to the 2.6CE, but I figured I would give it a shot anyhow.

I put the good chip in, loaded up the AID 4.53 DVD, opened up the BIOS Flashing Menu, disabled the chip, turned flash protect off, pulled it out and ever so carefully put the bad one in, enabled the chip and proceeded to flash the Evox M8+1.6 BIOS and it worked this time. After loading that one up on bank one, then flashed bank two with the Evox M8+1.6.FC.137 BIOS. Not really sure if I needed that one (I will be ordering a larger HDD soon), but that bank was useless to me with FlashBios 3.0.3 on it since it won't load on either of my 1.6 XBOX's.

Anyhow, I know the original XBOX's are almost dead, but it seems there are still peeps like myself that are reviving them once again.

I hope this will help anyone else who has a similar problem and can get their hands on another chip, you don't need a programmer to fix a bad flash...at least in my case.

Here is a pic of how I laid the components out so I didn't have to disconnect the drives to remove the chips. 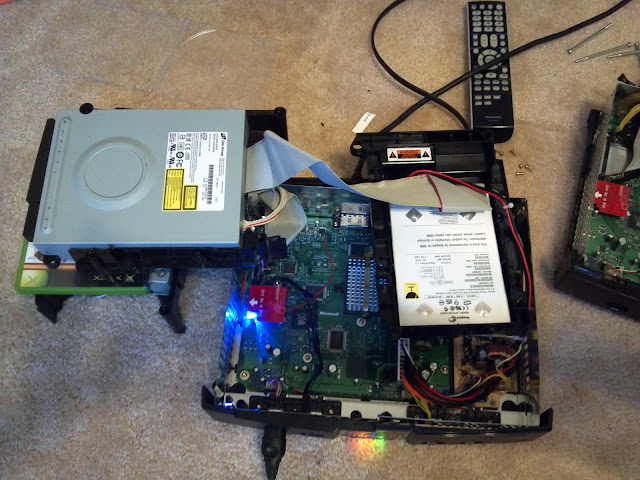 In the end...I now have a programmer that will collect dust...if anyone in or near Las Vegas that needs assistance, hit me up and I will let you use the programmer.

Not on this planet!