This is a review of downloadable content for BioShock Infinite. As such, it may contain spoilers for the main campaign or "Burial at Sea Episode One". - In some alternate universe, in some different timeline, BioShock Infinite's "Burial at Sea" was never split into two parts. I say "parts," and not "halves," because Episode One was, at best, a lackluster introduction. Its return to Andrew Ryan's submerged metropolis of Rapture was disappointing, its promise of noir intrigue petered out too quickly, and all we were left with was slightly different combat and a ham-fisted twist ending that was barely deserving of the term. It's a shame, then, that the BioShock Infinite creators in our universe chose to serve up Burial at Sea as two complementary products, because Episode Two is much stronger. Had Burial at Sea been released as one cohesive whole, the mediocre opening hours we know as Episode One might have been forgiven. As it stands (in this reality), "Burial at Sea Episode Two" delivers a better story with more emotional drive, and its combat feels fresher. Even its obligatory shock ending feels more in line with BioShock's pedigree. 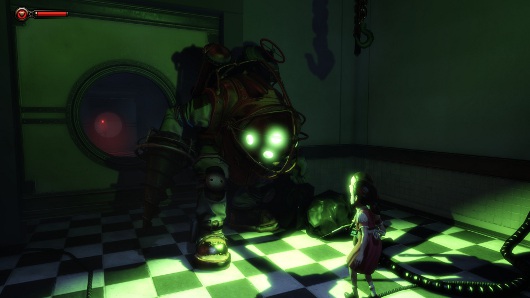 Burial at Sea Episode Two picks up immediately after Episode One. Players take on the role of Elizabeth, who has just gotten her revenge on Comstock. That vengeance came at a cost, however, namely a little girl called Sally, whom Booker DeWitt searched for in Episode One. The girl is now in the hands of Atlas, would-be savior in the eyes of Rapture's downtrodden and enemy number one in the eyes of Andrew Ryan. I won't spoil Sally's significance for those who haven't played Episode One, but suffice it to say that Elizabeth is wracked with guilt and will stop at nothing to get Sally back, even if it means making a bargain with Atlas, a man who isn't exactly trustworthy.
It's a simple enough premise, but it takes Elizabeth on a whirlwind (maelstrom?) tour of both BioShock's undersea haven of Rapture and BioShock Infinite's sky-bound city of Columbia. Whereas the highlight of Episode One was the return to Rapture, the real delight of Episode Two is learning the ways in which Rapture and Columbia are connected. Sure, it might all be retroactive continuity, but the two miraculous locales intertwine in alluring ways. In particular, Episode Two dives into the creation of Songbird and the Big Daddies, and both Andrew Ryan and Atlas nab their share of the spotlight. BioShock fans are sure to greedily gobble up every detail. 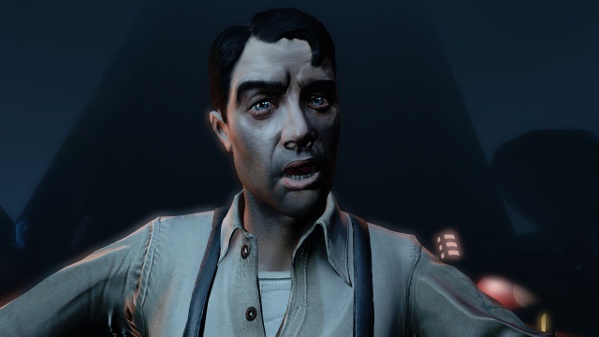 Along the way, Elizabeth runs into the Splicers of Rapture and the more confrontational citizens of Columbia. Elizabeth is no bloodthirsty Booker DeWitt, however, and players are expected to approach combat from a stealthier angle. You'll still encounter weapons with plenty of kick like the shotgun and hand cannon, but I found myself sticking exclusively to the new crossbow, which fires a variety of non-lethal bolts. Coupled with a new Peeping Tom Plasmid that renders Elizabeth invisible and allows her to see foes through walls, there was little reason to use anything else.
In fact, the combination of Peeping Tom and the crossbow is too powerful. Fairly early in Episode Two, I acquired an upgrade for Peeping Tom that let me see through walls without draining Elizabeth's Eve, allowing me to locate enemies at all times without fear of being spotted. Later on, another upgrade allowed me to spot enemies and become invisible indefinitely, so long as Elizabeth stood still. Enemies aren't smart enough to suss out Elizabeth's location when she's invisible – even when she disappears directly in their line of sight – which made it easy to knock them out with a stealthy melee attack. There were moments when baddies practically queued up to be incapacitated – briefly alerted as Elizabeth appeared from thin air to whack an enemy, then immediately stupefied as she disappeared.
Dimwitted AI aside, the focus on crafty knock-outs carries an innate thrill, and it serves as a nice change of pace for BioShock. The familiar stopping power of lethal weapons is still there if you want it, but be mindful that Elizabeth can't take as much punishment as Booker (only two or three hits on hard difficulty). 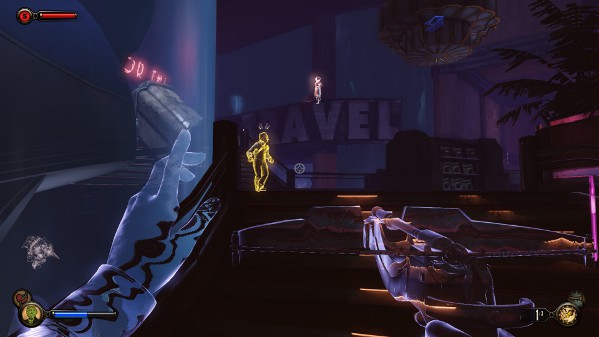 As ever, though, the star of Burial at Sea Episode Two is the world itself, or worlds in this case, and the story surrounding them. Episode Two touches on the keystones of the BioShock series, from the relationship between Big Daddies and Little Sisters to the multidimensional oddities of BioShock Infinite. Even if the bizarre collage of colliding realities doesn't really make sense – I'll let the dedicated fans work that one out – it's fun to learn more about Rapture and Columbia, and how these seemingly disparate worlds tie into one another. Uncovering these details is far more entertaining than dropping your umpteenth Splicer, and I won't spoil the surprises here.
It's unfortunate that Burial at Sea has been released in two parts, because players turned off by Booker's disappointing detective story may never experience Elizabeth's interdimensional trip through Rapture and Columbia. For everyone in our universe, I hope you paid for the season pass.
Source: joystiq
Join Our Facebook Group For All The Latest News[SUP][1][/SUP][SUP][2][/SUP]
[h=3]References[/h]

Thanks to: Rheena.com
Expand signature
PLEASE READ THE FORUM RULES BEFORE POSTING HERE
​