This morning, Rockstar Games unveiled a look at the content headed for Grand Theft Auto Online in the near future. By the end of Spring, the game should boast new weapons, player-crafted Capture Jobs and new co-op heist missions. Come next week, Rockstar plans to drop the first update which will add Capture Jobs to the crime-ridden online multiplayer game. According to Rockstar, players will be able to customize these Capture Jobs by placing weapons, ammo and other miscellaneous items as they please, then share the results with the rest of the Grand Theft Auto Online community. 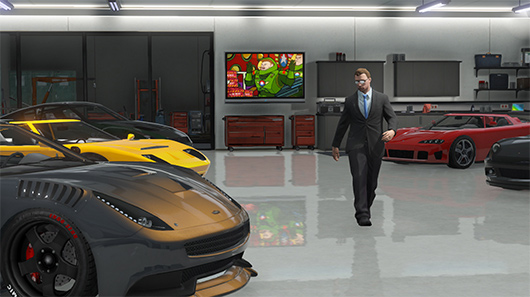 Following that addition, Rockstar will deliver the "High Life Update," a DLC pack that introduces new weapons, vehicles, clothing options and two new gameplay functions. Once installed, the High Life Update will allow players to own multiple properties in Grand Theft Auto Online, while the new Mental State statistic will keep a running tally of just how sociopathic your avatar has been within the virtual world.
Finally, Rockstar mentions the upcoming Heist missions. Scant details are available, but the developer claims players will be able to join forces with others, either random online players or members of their crew, to pull off complicated, co-operative theft assignments. More details on this particular update are said to be coming soon.
Press Release:
Hey everyone,
Today we are happy to share some details on a few of the many Grand Theft Auto Online updates to be added throughout the spring and beyond. Here's a brief rundown of some of the new content, features, and enhancements that players can expect to see in the months to come.
SPRING GAME UPDATES
Capture Creator: Coming next week, the Creator community will be able to make their own original customized Capture Jobs and add to the over 3.5 million (and counting) player-created Deathmatches and Races currently available on Social Club. Players can strategically place pick-ups, define weaponry, set location, and tweak tons of other variables to make their own unique Capture Job for others to take on. We will also be reviewing homemade Capture creations to stamp standout experiences as Rockstar Verified.
The High Life Update: The High Life Update will allow players to expand their foothold in Los Santos with new high-end apartment options, the powerful Bullpup Rifle, new wardrobe items, the Dinka Thrust motorcycle and three new lavish cars to choose from, including the Super class Pegassi Zentorno. The High Life Update will also feature the debut of multi-property ownership in GTA Online, which means players will be able to own two distinct properties (with garages) simultaneously. All this plus the new Mental State player statistic, which is designed to let players see just how passive or psychotically unhinged fellow players in their session really are, and a slew of new Jobs.
Heists: Coming this spring to Grand Theft Auto Online, players can team up with their most trusted Crew members or with random other mercenaries in Grand Theft Auto Online to pull off cooperative Heist Missions for glory and profit. Stay tuned for much more information to come.
And later this year, look for even more additions to both Grand Theft Auto Online and Grand Theft Auto V, including more holiday-themed updates, some very exciting Story Mode DLC and much more.
CONTINUING REFINEMENTS BASED ON COMMUNITY FEEDBACK
Ever since the launch of GTA Online, we've been continuously monitoring how the community is playing the game as well as all player feedback sent to [email protected][SUP][1][/SUP] address to see what the community is liking, disliking, and what should be addressed in upcoming GTA Online Title Updates.
In upcoming Title Updates and via dynamic tuning, players can expect:
· The addition of a 'Non-Contact' option for Races. This will allow you to play standard Races with collisions disabled between player vehicles. Other players will appear as semi-transparent and you'll still be able to collide with non-player traffic, structures and other scenery, but this mode - for those who want to play it - will eliminate the "rubbing is racing" mentality that some wish to avoid.
· Players will be able to call Lester and have him tell his cop buddies to turn a blind eye to any crime you may or may not be committing for a short period of time.
· As a reward for players who leave feedback on Jobs, there will be some bonus RP granted every time a player likes or dislikes content after playing it.
· GTA$ payouts will be increased when completing Parachute, Races, Deathmatches and LTS Jobs with less than 4 players.
· As part of our ongoing commitment to target cheaters and keep the game as fair as possible, we are closing RP exploits and will be adjusting the RP totals of players who we know for certain to have gained illegitimate RP by cheating. Your RP will only be adjusted if you participated in mods, hacks, DNS redirects, manipulation of cloud files, or other similarly nefarious behavior. If you grinded short legitimate missions or otherwise gained a small amount of RP without modding, your RP should not be affected by this correction.
· We'll be fixing the issue where players who had upgraded personal vehicles prior to Title Update 1.10 were only able to sell them for $10,000.
These are just a few of the ongoing tweaks and enhancements in the works - and as mentioned above, community members are encouraged to reach out and let us know what they'd like to see added to the world of Grand Theft Auto Online.
Source: joystiq
Join Our Facebook Group For All The Latest News[SUP][2][/SUP][SUP][3][/SUP]
[h=3]References[/h]