no opc, could they be any better with opc? and sorry if i posted the above like i found something important, was just a bit excited meh backups came out good

I've read that people who try 4x are using OPC.

If you can test, maybe this would be better... or maybe worst. Testing is the only way to know for your configuration.

Yes, OPC on is for 4x, as write in Ubergeek's tuto.

But, you can try at 2,4x with OPC on, the result could be better... trying is the only way to know.

Ok finaly I got a good result, after many hours and a plenty bad disc's I went radical. New OS W7 installed on my pc , media partition everything deleted except for the X360 games. Defragged both partitions. Turned all running program's off, internet connection turned off. Burned with opc on 4x speed ( mkm-003 made in Singapore ), EEEprom everything enabled except over speed writing.
Iso Modern.Warfare.3.XGD3.0800.Rip.RF.iND
Results:
PI max 55 , avg. 2,21
PIF max. 3 , avg. 0.09

Well, all I've done is what was in the original guide. I'm using Verts that I bought about 2 years ago, they are printable ones. I put on OPC and burn at 4x. I also cleared OPC before each burn. I also set imageburn to realtime priority. Using Windows 7. These are the only settings I have tried, I didn't do anything different for my first 2 discs.

I think these are pretty damn good if I understand correctly.
J

Would you ignore this obvious error or would you recommend burning again? I know it is a spike but the rest of the disc seems very good. Will one thin spike ruin the disc? Thanks.

I ran the test again and the spike reduced to 40. Why does it do this? Now it is in acceptable parameters would you say its okay to use? Is it worth running the test a second time if your first results are not up to scratch?
Last edited: Nov 8, 2011
Z

warzone2159 said:
GUYS A BREAKTHROUGH HAS BEEN FOUND WITH MKM001 discs. if your still having terrable results, turn on all lite on options in eeprom utility, and force burn to 4x and in the write tab set priority to realtime.( do not have anything running in background for better results)
Click to expand...

This is exactly what finally worked for me (after 15+ coasters!)

Yes, made in Singapore. Lowest previous PI was 12.XX

my settings, ht on olht, on smart enabled, in imgburn i put the buffer at 42, and untick enable burn proof.
B

are these good results?
D

booch2001 said:
are these good results?
Click to expand...

Yes, no problems there.
J

Gears of War 3
Verbatim 003 at 4x Speed OPC on.
Smart Burn On
Hyper Tuning On

Would you say this result in Kprobe is okay? Thanks.

I'm getting a few backups with one high spike and the rest all low and am not sure how to proceed. Any advice would be appreciated.
Last edited: Nov 8, 2011
K

Would you say this result in Kprobe is okay? Thanks.

I'm getting a few backups with one high spike and the rest all low and am not sure how to proceed. Any advice would be appreciated.
Click to expand...

looks good but try to clean OPC every burn...
B

ok thank you very much for replying
J

Funnily enough I did clear OPC for the first time before the burn. So a one off spike above 100 is okay if it is isolated like this?
F

I think these are pretty good. When I wrote the disc at 4x with OPC the results were horrible. These are good right?
Where do I check the Nero speed? Will Kprobe do it or do I need to download Nero?

Hey guys, I've got an iHAS224B and I'm having issues. I've wasted about ten discs thus far, and my best burn had a spike of around 180 for PIF at the layerbreak. I'm using Made in Singapore MKM003s and my PC has a SATA ICH7 chipset.

Still, nothing. HEre's an example of what my average burns look like. The first is 4x OPC, the second is 2.4x no OPC. 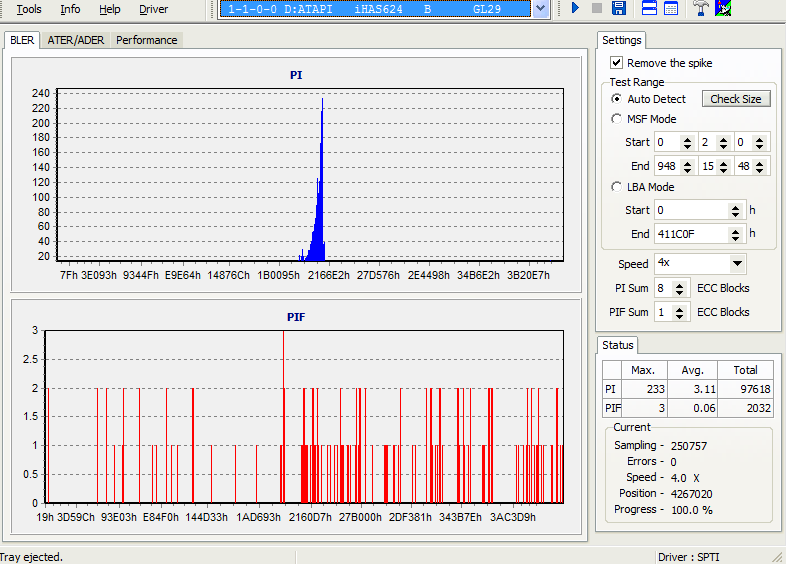 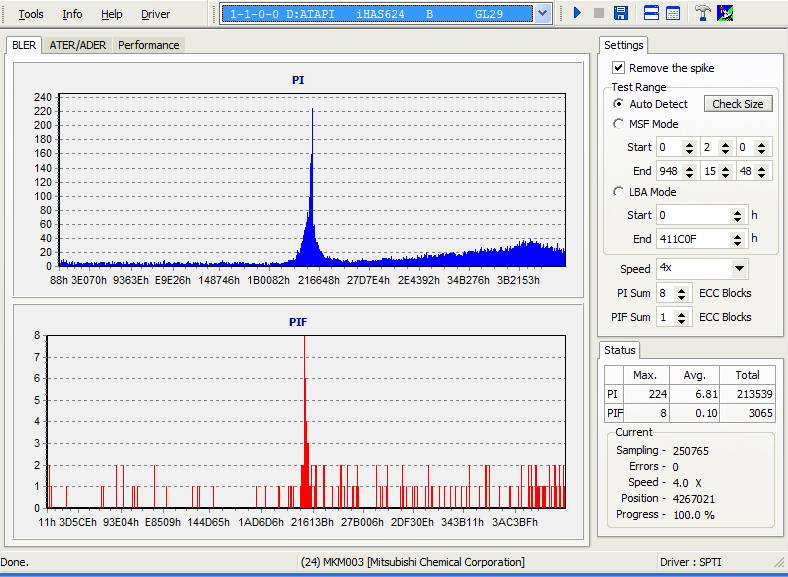 As you can see, the first burn is pretty darn good right up until the layer break. This happens with every single burn - everything is smooth until the layer break. I've tested some of these discs in my Xbox, and so far one of them shows up as a game and the rest were unrecognized discs (probably gonna get me banned, huh?). The game is MW3.

"The fact that the burn verifies at 100% is irrelevant when you are testing the quality through KProbe2 so you may want to not waste your time doing that extra step. It doesn't hurt of course - but if you are running a full Kprobe scan its going to give you your correct verify results anyway regardless of what imgburn tells you."

But imgburn verify against the actual image and KProbe2 is testing disc integrity with no knowledge of the initial image? So then shouldn't people still be doing both?

I really apologize if this was answered, I searched to no avail... Thanks
D

read : http://www.team-xecuter.com/forums/showthread.php?t=74721 , post 4 at bottom gives the settings, made and tested by Lightning UK and DrunkenNinja!

ever scince i have had perfect burns (and this is on crappy taiwan!!!) :

Expand signature
If i helped, dont forget the Thanks button
D

I just want to give this advise for the one's that have the same crappy pc like me. I had many coasters and the only thing that fixed the problem was.

- Make sure that the partition wich you saved x360 iso's on is defraged and at least 1/3 of free space.

EEprom all one - except over speed writing,Imgburn OPC on - 4 x speed ( no verify, waste of time lol ), used media MKM-003